Hopefully we have learned at least one hard lesson of life, and that is that a crisis is a terrible thing to waste. And here right before our eyes we have a case in point with the

Occupy movements that are sweeping Europe and North America, a public crisis that is most unexpectedly taking place on “public land”. And then suddenly, with no advance notice, everything starts to morph and the issues involved start to encompass not only the continuing unchecked egregious abuses of the financial community but also important (for democracy) issues of public  space — one of our consistent concerns here at World Streets. So in an effort to make sure that we do not miss the opportunity behind this crisis, we pass the word back to Andrew Curry so that he can build further on his article under this title earlier this week

In my earlier post a few days ago, I wrote about the background to the widespread privatisation of public space. In this second part I look at some of the activist and political responses.

The idea of public space is at the heart of the idea and the life of the city, as Paul Kingsnorth wrote, in his book Real England:

It is the essence of public freedom: a place to rally, to protest, to sit and contemplate, to smoke or talk or watch the stars. No matter what happens in the shops and cafes, the offices and houses, the existence of public space means there is always somewhere to go to express yourself or simply to escape. … From parks to pedestrian streets, squares to market places, public spaces are being bought up and closed down.

A couple of years ago Blueprint magazine, working with the progressive libertarians of the Manifesto Club, chose to go to places which we think of as identifiably public space in London, such as Trafalgar Square and the riverside area in front of the City Hall. They went back on different days to picnic, sometimes with drink, wearing different clothes (hoodies always went down well with security personnel). There’s only a summary online, but it was an interesting experiment. In More London (privately owned and managed, seen above), they were moved on, by security staff citing ‘health and safety’ reasons, which may sound familiar this morning.

The rules in Trafalgar Square – publicly owned but tightly restricted under social order legislation – are different in the north half from the south half, below the steps. Deck chairs were not permitted above the steps: below the steps, although drinking is not permitted, the police were happy provided they put bottles out of sight and drank the alcohol from teacups. But then the police have more leeway than security guards, who are poorly paid, and also heavily monitored (by CCTV) themselves.

Instead of the ambiguity that comes from different groups of people sharing the same space and using it for different purposes, there is a conformism … Anyone doing something a bit different stands out all the more and is increasingly likely to be seen either as a threat or a source of embarrassment.

No fun: ‘Welcome to London Bridge City. You are now entering private property’

Space Hijackers, who  also spoke at the Occupy LSX event I mentioned in my first post, subvert these newly private spaces in ways which make more explicit the way the space is controlled. They add posters which set out the rules (‘NO FUN’, ‘NO OLD PEOPLE’, ‘ENJOY YOUR STAY’), they intervene to prevent passers-by from doing things like holding hands or otherwise enjoying themselves. They tend to stay until they have attracted the attention of the security guards – which they always do because of the pervasive CCTV – but leave before the police arrive. More extreme interventions include night-time cricket games, in full whites, in private spaces such as Paternoster Square.

Part of the Space Hijackers’ critique of this privatisation process is that it diminishes the social aspects of the street so that it can emphasise consumption. “They say, ‘You’re welcome here as long as you spend your money’. It turns us into isolated little bubbles”.

Diane Coyle touched on this from a different angle recently when she wrote of the way in which public life is designed out of the city:

The enclosure of open space in private malls, the design of street furniture to make sitting down (never mind sleeping) a challenge, the bearing down on demonstrations and gatherings and even photography on the grounds of law and order or security, have all contributed to discouraging public gatherings.

Taking a historical perspective, the opportunity to reconstruct urban space so radically, observed Anna Minton when she spoke at Occupy LSX, was created by the de-industrialisation of the city, and the closure of the factories, works, warehouses and docks which used to dot the urban landscape (as one look at any 1970s street map reveals).

What we’re seeing as a result is a fairly rapid reversal of the long trend through the 19th century of roads and highways being ‘adopted’ by the public authority. Minton pointed out the irony of the City of London Corporation trying to use the Highways Act (about maintaining public access) to remove the Occupy protesters outside St Paul’s after being so aggressive in privatising land elsewhere in the City of London.

There are a couple of interesting paradoxes here, which mean that such approaches to managing public space are self-defeating. The mantra of a manager of such privately-controlled spaces is ‘clean and safe’, but they also want to see some energy, which is good for business. What we know about safety in public is that it comes mostly from social interaction, not from the paraphernalia of security management: by banning so many activities, social interaction is reduced, not enhanced. 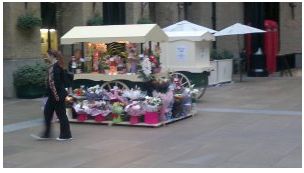 The second paradox is that the management companies believe that ‘clean and safe’ is merely the bottom level of a Maslovian hierarchy, and that once that is established,the site moves up to energy and excitement. Not so; by killing off the messiness, you also kill off the diversity and difference that bring cities to life. You can’t make yogurts or urban environments without some live culture. (The picture shows the feeble attempt by one privately owned space to inject some untidiness. No, they really don’t get it.)

Perhaps improbably, one of the people who realises the costs of this privatisation is the Conservative Mayor of London, Boris Johnson, who issued  ‘A Manifesto for Public Space‘ (opens pdf) in 2009. It turns out that developers do not need to be bribed with gifts of public land, as they were so notoriously in the building of Liverpool One. The Manifesto is explicit about the need to maintain city space as public space.

There is a growing trend towards the private management of publicly accessible space where this type of ‘corporatisation’ occurs, especially in the larger commercial developments, Londoners can feel themselves excluded from parts of their own city. This need not be the case. At Kings Cross it was agreed that the London Borough of Camden will adopt the streets and public areas. Elsewhere unrestricted 24-hour access to the area has been agreed. This has established an important principle which should be negotiated in all similar schemes.

Despite the title, this is a policy document with the status of legislation. It’s early days: property development is a slow process, especially during a downturn. And so far the Greater London Assembly seems to have disregarded it. But there’s a simple, important principle within it: as Johnson writes, “I want to ensure that access to public space is as unrestricted and unambiguous as possible.” For Londoners at least, it provides a space in which planning and property become visible again, the proper subject of politics.

The photograph at the top of this post is from Blueprint, and is used with thanks. The others were taken by Andrew Curry, and are published here under a Creative Commons licence: some rights reserved.

Andrew Curry works for the London-based consultancy The Futures Company

(formerly Henley Centre HeadlightVision), where he specialises in futures and digital media. (Its blog is here). He started worked as a financial journalist for the BBC and Channel 4 News in the UK, and later launched Britain’s first interactive television channel. He is a member of the Association of Professional Futurists and a Fellow of the Royal Society of the Arts; his articles about futures, and the digital and creative economy, can be found here.